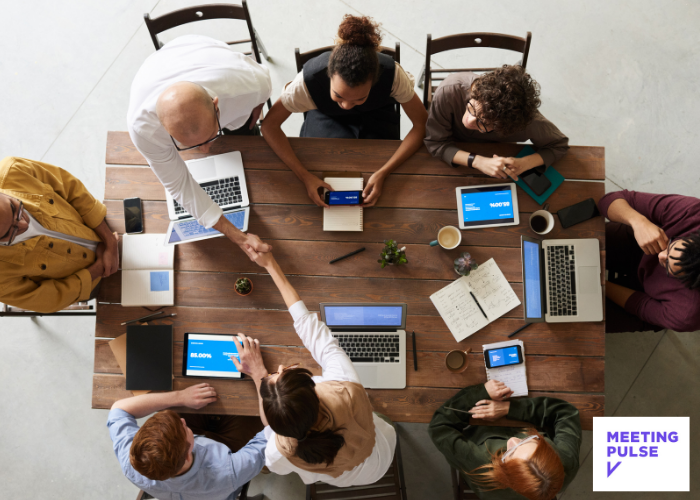 The average meeting or event is a breeding ground for group-think and conformity. Studies show that the discussions — and resulting ideas — of meetings and events tend to involve the same few people talking about the same ideas, anchored by the talking points of the most senior people in a meeting or the speakers or panelists in an event. That’s why the best meetings and events focus on the ideas they’re able to harvest from their participants rather than the identity or status of their sources.

One of the best ways to do so is to introduce anonymity into brainstorming ideas and voting on those ideas, so that ideas can be evaluated on their merits rather than under the pressures of conformity and group-think. Are you ready to unlock original ideas and honest discussion? Let’s start by understanding why it’s so important to create environments in which you can benefit from the full diversity of thought and experience in your groups.

When we think about what it means to have a diverse group, we often describe it in terms of race and gender. But while it’s important to support racial and gender diversity and inclusion in meetings and events, these dimensions only begin to scratch the surface of what a truly diverse group really means. In this article, we will be taking an in-depth look at an important, but more nuanced, dimension of workplace diversity: diversity of thought.

Different people have different — indeed, unique — perspectives and styles of thinking. Each person has had different experiences and influences. To truly encourage diversity and an inclusive culture, smart corporate leaders realize they have to harness this diversity of thought and experience — also known as cognitive diversity — to start, grow and maintain productive teams.

Legacy diversity, or inherent diversity, refers to differences we are born with or born into and how those affect one’s world view. Some of the contributing factors are age, gender, nationality or ethnicity, socioeconomic background, and sexuality. These are sometimes considered “fault lines,” across which people may have difficulty connecting and communicating.

Experiential diversity comes from your experiences and how those experiences inform your thinking. You can also think of this as acquired diversity. We typically acquire unique experiences through our family, schooling, where we grew up, our marital status, our educational level, or even how long we worked in a company. Working or living in another country can significantly broaden one’s appreciation of cultural differences.

Why are these both important? Researchers from the Harvard Business School found that companies with someone in leadership who has at least three inherent and three acquired diversity traits (that is, diversity on two dimensions) will out-innovate and out-perform companies lacking such traits. Most companies lack two-dimensional diversity, creating enormous opportunities.

How often have you been in a meeting when someone says something that makes you think, “Why didn’t I think of that?” That may be diversity of thought in action. Each of us brings to the table our own unique blend of identities, cultures, influences, and experiences that inform how we think, how we approach problems, and how we undertake tasks.

Various research-based theories have evolved to understand cognitive diversity. The Herrmann Whole Brain Model, for example, suggests that we each have access to four different thinking styles — analytical, organized, interpersonal and strategic. People tend to develop preferences for one or two over the others, thus adding to the cognitive diversity among any group of people.

Thought diversity evolves from how our biological hardwiring and our experiences combine to provide unexpected connections and insights. Diversity of thought isn’t just recognizing and responding to such differences. Instead, the focus turns to appreciating the potential promise of each person’s unique perspectives and different ways of thinking.

Why is diversity of thought so important?

Diversity of thought isn’t just the latest business buzzword. There is empirical evidence that when a company hires, promotes, and cultivates its people to achieve cognitive diversity, they are more innovative and more profitable.

As we noted earlier, cognitive diversity can flow from demographically diverse employees. Data shows that diverse organizations — whether diverse cognitively, racially, in terms of gender, gender, or generationally — perform better than their peers. Rocìo Lorenzo and Martin Reeves, writing in the Harvard Business Review, found that companies with above-average diversity have higher innovation revenues. McKinsey has reported that executive gender and ethnic diversity correlate with profitability.

Another study from the Harvard Business Review reported that demographic diversity itself was less a predictor of performance than cognitive diversity. In this case, researchers assessed cognitive diversity by using the AEM Cube test. Teams with greater cognitive diversity were able to solve a problem three times faster than those with less diversity. Similarly, a Deloitte study found that cognitively diverse teams can boost innovation by upwards of 20 percent.

These benefits are not yet universally understood. Lorenzo said, in a 2017 TED Talk, that many leaders he met “saw diversity as something to comply with out of political correctness, or, best case, the right thing to do, but not as a business priority.” In an era of change and disruption, when the need to innovate is a constant, there is a clear business case for cognitive diversity.

What contributes to diversity of thought?

Cognitive diversity doesn’t just happen. From the C-suite down, a company has to take intentional actions to broaden diversity of thought within its ranks. This means more than promoting diversity or encouraging diversity. Study after study has shown that typical diversity initiatives such as hiring quotas and diversity goals are less than effective.

A couple of implications are immediately obvious. The first is that an organization and its leaders have to let go of the idea that “there’s only one right way” to get something done and focus, instead, on creating a culture where people feel accepted and safe. Then they can be comfortable contributing different ideas from their unique perspectives.

The second implication is that conflicts around those different ideas are inevitable. The CEO whose ego has to be stroked by total agreement will not encourage off-the-wall ideas or different perspectives. “If everyone on my team is constantly agreeing with me, I’ve made a terrible series of hiring mistakes,” says Stacy-Marie Ishmael, a Buzzfeed News executive.

So where does the process of building a team of cognitively diverse thinkers begin? You may already have some, so first gain a deeper understanding of incumbents using one of the trusted assessment tools. Identify the gaps, and then go about filling them. This is harder than it sounds because people don’t naturally seek to upset the status quo.

<H2>Making room for ideas and input

Digital tools give the leaders of businesses and other organizations new ways to cultivate diversity of thought in meetings and events. Digitally connected meetings can be more productive by increasing both the number of ideas and the diversity of ideas generated.

When people are connected electronically, whether it’s during a live meeting, a virtual meeting or a hybrid, these tools make it easier for everyone to respond. Presenters can use surveys, quizzes, polls, and similar interactive tools to solicit input from participants.

When it's easier for everyone to respond, you hear from more people. These tools also have the power to give anonymity to responders. People no longer have to worry about their ideas being put down or ignored because of who presented them. When you add anonymity, you get not only more responses from each person, but you get their truest, craziest, most creative ideas. These are ideas a group would never receive if people were conflicted about getting shot down.

Furthermore, in a digital meeting, people can easily vote anonymously on the issues and ideas of others. That means that people who might tend to feel more marginalized — ironically the people with greater diversity of thought — feel safer to express their views. The votes garnered by an idea don’t simply reflect the power of the person who proposed it.

Studies indicate that the average meeting sees 25% engagement. That means 75% of the group is tuning out — maybe their video is off, maybe they’re playing Wordle. The services from MeetingPulse can increase engagement to 91%. That means more people are contributing ideas. If participants have anonymity, not only will more people contribute ideas, but you’ll get more ideas from each person. If, as studies indicate, people present about 1.7 ideas per meeting, the use of MeetingPulse would bring 4.5 ideas per meeting. Inclusion has improved dramatically, but so has idea generation and innovation.

How many great ideas can your company stand to lose?

How (good) meetings can contribute to diversity of thought

Don’t you just dread meetings where people clam up? Chances are there’s diversity of thought going on inside people’s heads, but they fear being shot down or laughed at. It’s the leader’s job to facilitate the conversation and make employees with different backgrounds comfortable with speaking out.

One way to do that — whether meetings are in-person, hybrid or virtual — is to create a platform for engagement and interactivity with live polling and surveys, live feedback, and live Q&A sessions — especially with anonymity features. MeetingPulse helps companies engage attendees with powerful, flexible interactivity tools for Q&A, moderation, polls, surveys, raffles and more.

Does it improve cognitive diversity? From MeetingPulse’s global clientele, we often receive feedback like this: “Everyone has started to share more ideas about the direction of the company.” Learn more at MeetingPulse.net or email info@meetingpulse.net.