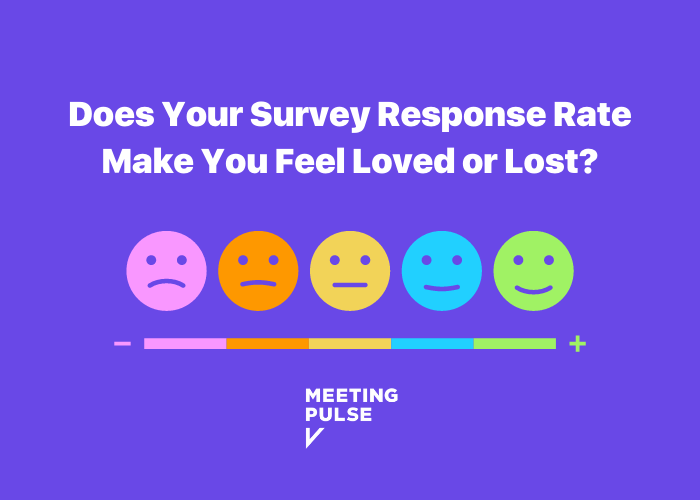 Imagine: You’ve emailed a carefully designed survey to a big list of people and responses have started trickling in. As you begin to look them over, you realize that you have no idea what the survey response rate should be. How many responses do you need to make the results meaningful? What are typical survey response rates? You have more questions than your survey did!

That’s OK. Keep reading and you soon will understand why it's important to track the number of responses. We also will give you examples of how to determine survey response rates on your own.

Why is the response rate important?

Say you emailed out 1,000 surveys, and received only 50 responses. That gives you a 5% response rate. There is a very small likelihood that the results you gathered from so few responses will be helpful.

Why? Let’s say you use surveys to gather data as part of your market research. With each survey, you are likely looking for specific information that helps refine your processes and strengthen your connection with an audience. If participation is low, the amount of data will be limited. Furthermore, it’s risky to make decisions based on a small overall number of responses or even a small percentage of responses. The respondents might be outliers who don’t really represent the people you are trying to reach.

The response rate also tells you something about the survey itself. A higher response rate indicates that your survey was easily understood and didn’t consume too much time. Response rates help you gauge how well your surveys are constructed and distributed.

In addition to tracking your response rate, you should also track your survey completion rate. These similar-sounding terms have very different meanings. Within a total number of responses, some will be incomplete. The completion rate refers to the number of people who finished a survey once they started it.

Now that we’ve learned how to calculate rates, how do you know if you've gotten an acceptable survey response rate?

Average survey response rates are hard to pin down. Rates vary considerably depending on many variables, like survey distribution methods, survey types, and your respondents’ relationship to you (or lack thereof).

It’s important to note that each type of survey has its own average response rate. For example, online surveys and in-person surveys will bring very different results. More on that in the next section.

Many factors can bring your survey a low response rate. It seems that there is no end to the reasons why potential respondents choose not to complete or return a survey.

A weak survey invitation or opening line can turn off a reader. A poorly designed survey sent through a smartphone app will have them looking for the fastest exit. And if you’re sending out a survey by email long after an event, it will be of less interest to the receiver than it would’ve been had you timed the survey to take place right after the event.

The polls and surveys offered by MeetingPulse to people running events and meetings are designed to overcome all these problems. The wide array of tools it provides includes the capability to draw survey responses as soon as an event ends, so that things are still fresh in the minds of respondents.

How do I get a high survey response rate?

Despite the difficulties we’ve discussed, there are some simple methods for driving up your response rates.

Customizing your survey to the recipient group

Think about the group of potential survey respondents while you craft their survey. Focus on customizing the questions in a way that will be more engaging to those people. MeetingPulse has a tool specifically designed to employ custom questioning — sometimes called dynamic or conditional polling.

Do you find that when an event or experience is fresh on your mind, you’ve got more to say about it? Your respondents will, too. A big factor in boosting response rates is to send your survey out as soon as possible. You want to reach your target audience while they’re still thinking about you, not after they’ve forgotten why you’d be reaching out to them. We’ve found it works best to send out the survey during the meeting, at the very end.

Appeal to a higher nature

It’s a good thing to use a little charm. Try appealing to the desire of your respondents to feel important. This works for in-person surveys, emailed surveys or surveys done live during meetings. Tell people how the data will be used, how they were chosen to be surveyed, and how their answers could, potentially, benefit or impact a larger group of people.

It’s common for a user to open a survey and think to themselves, “I’ll get to this later on.” Unfortunately, not everyone will. Sending out a gentle reminder after a few days to nudge respondents to wrap up can help remind them. More than one reminder is fine, but keep it to a maximum of three reminders or you risk annoying your respondents.

Use a response or consumer panel

You can develop and manage your own survey panel by gathering a group of respondents who volunteer to answer your surveys. These people will be highly likely to participate. A panel like this is particularly helpful for groups that haven't established a customer base to reach out to. If you plan to use a series of surveys, having a preset group can help you gain more insights than you would by surveying different people each time.

While sending surveys out can help you understand what your target audience is thinking or feeling, you cannot truly understand your results until you’re tapped in and doing everything you can to get a good response rate. MeetingPulse offers many tools to help you boost your response rates for more sophisticated data analysis.